Description of the Diploma Thesis

The incidence of sudden cardiac death remains the leading cause of death in industrialized countries, exceeding 300,000 events per year in the United States, or about 20% of all deaths annually [1, 2]. The general definition of sudden cardiac death is an unexpected death within one hour of onset of change in clinical status as a result of cardiovascular causes in persons with or without preexisting heart disease. Mostly ventricular tachycardia degenerating to ventricular fibrillation (VF) caused by ischemic heart disease is thought to be the reason [3]. Additionally, sudden cardiac death occurs in a small percentage also in the setting of ion channel mutations such as the long/short QT syndrome, Brugada syndrome, and catecholaminergic ventricular tachycardia [4]. 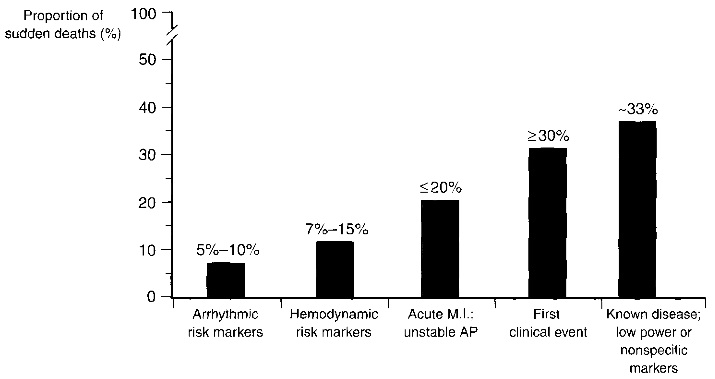 Fig. 1.1. Clinical status of sudden cardiac death victims. Sudden cardiac death is difficult to predict as more than 30% of the victims had a first clinical event or a known disease with nonspecific markers. Image taken from [1].

Ischemia is understood as a condition in which the blood flow to a part of the body is completely or relatively restricted. Cardiac ischemia, as the name implies, especially is the denotation for reduction or cessation of blood flow to the heart muscle and is characterized by a deficient energetic input and a deficient waste removal. In ischemic heart disease the amount of blood which the arteries provide for the heart to function at normal parameters is dramatically reduced. The reason for this is normally a coronary occlusion. This is, the coronary arteries which supply the heart muscle with blood are narrowed or even completely blocked. As such, less blood and with it oxygen reaches the heart muscle. The consequences of myocardial ischemia can be temporary pain and interruption of the activity of the heart muscle for a shorter or longer period of time. If the duration of the reduction or cessation of blood flow lasts longer the heart muscle can suffer a permanent damage, in which situation it is irrecoverable. This is seen as an infarct. Furthermore, arrhythmias caused by an irregular heart beat can occur [3]. Therefore, sudden cardiac death can be the consequence of myocardial ischemia and infarction. As such, the underlying electrophysiological mechanisms in ischemic human hearts are of great clinical and scientific interest. However, until now there exist only a few approaches in modeling cardiac ischemia in guinea-pig hearts. Hence, the aim of this work is to elucidate the effects in human ventricular myocytes during ischemia.

Aim and general outline
The aim of this diploma thesis is to describe, model and study the biochemical and electrophysiological changes in human ventricular myocytes during ischemia. Mathematical modeling is used to investigate possible ionic mechanisms underlying the course of ischemia this is, the temporal and spatial effects of ischemia are simulated with mathematical cell models of human ventricular myocytes. Therefore, it is necessary to adapt the existing cell models to be able to simulate the consequences of ischemia. Especially for hypoxia a new ion channel had to be integrated into the cell models that was not present until now. The main focus lies on the first 10-15 minutes of ischemia. The excitable properties of the tissue are described by two different models, the Kurata et al. model and the ten Tusscher et al. model version 2006. The models were adapted for being able to mimic the different faces of ischemia which is modeled by its major pathophysiological components: hyperkalemia, acidosis, and hypoxia.

The following tasks are considered in this work:
• Analysis of the different effects present during myocardial ischemia and their manifestations
• Incorporation of an ATP-sensitive potassium channel for enabling the modeling of hypoxia
• Adaption of the ATP-sensitive potassium channel according to its transmural heterogeneity in subendocardial, midmyocardial, and subepicardial cells
• Implementation of a time dependence for modeling the strength of ischemia effects
• Implementation of a regional dependence of ischemia for modeling regional ischemia
• Incorporation of global ischemia and influences by coronary blood flow
• Combination of time and regional dependence
• Single cell simulations of individual ischemia effects as also a combination of the effects
• Tissue simulations
• Whole heart simulations and Body Surface Potential Maps

Summary
The computer-aided simulations and investigations of ischemia and the thereby arousing effects in human ventricular cardiomyocytes will help engineers and health professionals to understand the devolution of cardiac ischemia. Today, computer models are to a certain extent pretty well able to pattern the reality. This is not only due to the powerful computing resources but also because of very exact mathematical formulations of a human ventricular myocyte. Therefore, the aim of this diploma thesis is the usage of these models and to adapt them in a sense that cardiac ischemia can be modeled and simulated.
Chapter 1 provides an introduction and circumscribes the task that is to be fulfilled. The second chapter explains biophysical and biochemical properties of cardiac cells. Different basic mechanisms of transport and the electrical properties of the plasma membrane are described. For understanding the mechanisms of ischemia, ion channels, ion exchangers, and ion pumps are explained. Furthermore, the very important energy household of the cell in respect of ischemia is regarded. Chapter 3 gives insights into the incidence of cardiac ischemia and depicts why and how ischemia occurs. In addition, the known syndromes appearing by reason of cardiac ischemia are mentioned and specified. This is, the three major pathophysiological components, hyperkalemia, acidosis, and hypoxia are investigated. The mathematical formulations by means of cell models of human ventricular myocytes are described in chapter 4 while those models result in differential equations delineating the electrophysiological properties of a cell. All modifications and adaptations carried out in order to be able to model and simulate cardiac ischemia are being summarized. This comprises on the one hand the modeling of the three major components as also the consideration of global and regional ischemia. Chapters 5 and 6 give insights into the gained results concerning the action potential morphology changes received after modification of the cell models. For a pervasive understanding of the effects of ischemia by means of hyperkalemia, acidosis, and hypoxia each manifestation is investigated individually and later on in combination in a single cell environment. Tissue simulation results attained by coupled cells and integrated different forms of ischemia are described in chapter 7. At first, a parallelepipedal tissue of the left ventricular heart wall was chosen and the excitation propagation and repolarization in this structure was analyzed. Simulations in this tissue showed that excitation propagation differed at different basic cycle lengths as also with different sizes of ischemic regions. Accordingly, in this chapter the correlation of basic cycle length and size of the border zone together with altered refractoriness is being explained. Finally, simulations conducted in the ventricles of the Visible Man are being investigated and presented. Electrophysiological modeling of the ventricles and forward calculation of the body surface potential map (BSPM) was carried out and the corresponding Einthoven II ECGs have been calculated and are additionally depicted in this chapter. Both Visible Man ventricles have been calculated without ischemia and with ischemia at basic cycle lengths of 500 ms and 2000 ms.

Discussion
In the presented work, ischemia, represented by its three major effects, hyperkalemia, acidosis, and hypoxia, has been successfully integrated into two cell models of human ventricular myocytes. The basis of modeling these three effects has been performed according to other groups. However, various enhancements have been conducted as well. First of all, it is the first in the world using a human ventricular myocyte model as basis for modeling of ischemia. For hyperkalemia and acidosis the cell models needed not to be extended since variables for extracellular potassium concentration [K+]o and for the channel conductivities of INa and ICaL were already present. In case of hypoxia, a new ion channel has been incorporated into the models that was proposed by different groups such as Ferrero et al. [83] and Shaw and Rudy [84]. Both approaches have been analyzed and finally merged into one equation that fitted into the cell models of human ventricular myocytes. Therefore, the surface membrane area specified in the ten Tusscher et al. model version 2006 has been validated by comparing it to the defined membrane area of Shaw and Rudy. Simulations have first been performed in single cell environments with individual effects and with combined ischemia effects at fixed strengths of ischemia. The gained results were concomitant to the results of other groups [78, 86, 89] and showed a change in action potential morphology. Hyperkalemia elevated the resting membrane voltage and lowered the maximum action potential amplitude while acidosis and hypoxia reduced the action potential duration. In contrast to the modeling of ischemia by other groups [82, 89, 111] the modeling in this work allowed not only to simulate ischemia at fixed and well measured time stages but also at intermediate stages at an arbitrary chosen time. On the basis of measurements however, the known strengths of ischemia effects at the fixed time stages were used as references. Furthermore, contrary to other groups enhancement of the implementations allowed the simulation of ischemia in combination of time and location. This is, distinctive regions affected differently by the impact of coronary occlusion can be defined in the tissue while in these regions the ischemia effects accumulate with the time. Even if the regions have been selected as ischemic in the tissue, the affected cells are still able to remain healthy until simulated coronary occlusion has been started and the ischemia time course begins. By this, the modeling allows a complete simulation of regional ischemia that starts with healthy heart tissue and ends with ischemia in stage 2 in that part of the heart affected by coronary occlusion. Accordingly, the modeling offers many degrees of freedom. Thus, the position as also the size and structure of the ischemic region can be freely selected and furthermore, the underlying time course may be individually defined. This enables the modeling of different manifestations of cardiac ischemia.