QT-prolongation can cause the development of ventricular tachyarrhythmias such as Torsade de Pointes (TdP) and ventricular fibrillation often leading to cardiac death. QT-prolongation and TdP have been identified as a side effect of some commonly used medications. Thus QT-analysis plays a major role for the pharmaceutical industry on the way to developing new drugs.
One major problem in analyzing QT-interval prolongation is the detection of the end of the T-wave. Reliable automatic delineation of the T-wave’s end (Tend) is a particular challenge thus FDA requests further investigation on Tend delineation. Recently a correlation-based method to detect Tend was developed for evaluating thorough QT-studies at the IBT. 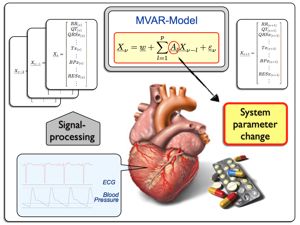 Although QT-interval analysis is the gold standard for identifying drug induced electrophysiological changes in the heart today, a more detailed and reliable way to detect small electrophysiological changes is requested. In this project the human’s heart is mathematically described using a multivariate vector autoregressive model (MVAR- model).
ECG and blood pressure (BP) are measured during a period of some hours, where a drug was administered and took effect. The measured signals are processed to extract several parameters (descriptors) for every heartbeat. These descriptors can be time based, e.g. QT- and RR-interval or dependent on the morphology of the QRS-complex, the T–wave or the BP-curve. The descriptors can be interpreted as a multivariate time series. If the time series are evaluated with an MVAR-model it is possible to estimate the system parameters. These describe the interdependency of the time series. In case a drug affects the heart, the interdependency of the time series changes and thus the system parameters of the MVAR-model. The MVAR-model system parameters are supposed to be more sensitive to drug induced electrophysiological changes as the sole QT-interval.