Atrial fibrillation (AF) is the most common cardiac arrhythmia, affecting more than 1% of the popu- lation. 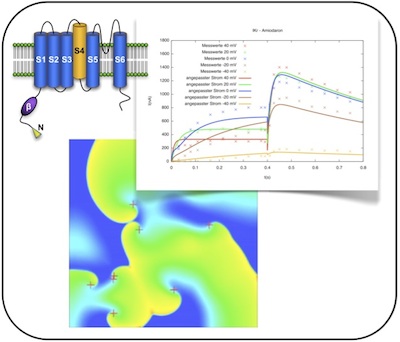 In most patients, AF is associated with structural cardiopulmonary diseases. However, some of the patients do not suffer from these comorbidities. Instead, these patients are supposed to be genetically predisposed to AF, which is called “familial AF”. For both forms of AF, the electrophysiological mechanisms underlying the initiation and persistence of AF are understood only incompletely, to date.
In this research project, we aim to unravel the influence of several electrophysiological mechanisms initiating or reducing arrhythmias. On the one hand, mutations of several atrial ion channel-encoding genes are integrated into established models of human atrial electrophysiology based on measurement data. On the other hand, changes induced by chronic AF itself (so-called remodeling) are known to favor AF persistence. We aim to assess these changes on the cellular and tissue level by integrating ion channel data from literature into the models.
Using the adapted computational models, anti-arrhythmic drug therapy can be evaluated and optimized using both existing pharmaceutical agents and newly designed hypothetic ones.